The American Correctional Association (ACA) is flooding Boston with ICE agents, jailers, and detention center profiteers August 1-6! The ACA is an organization that accredits prisons that abuse transgender people, detain immigrants in concentration camps, separate families, and profit off of caging people. This year, they are even giving an award to GEO Group, the company that runs most of the immigration detention facilities in the US and regularly makes millions in profits from contracts with ICE.Learn more about them here: deeperthanwater.org/noACA

Boston Marriott Copley Place, Hilton Boston Back Bay, and Sheraton Boston Hotel have agreed to provide housing and venue space for the ACA’s “Congress of Correction”. By profiting off this conference they facilitate the strengthening of ICE, anti-immigrant institutions, and the prison industry.

Marriott (which operates Sheraton) and Hilton have BOTH publicly committed to not allowing their hotels to be used as detention facilities but why are they allowing them to be used by the people in charge of and responsible for the detention centers??

MAKE 3 SHORT CALLS on Thurs 7/25 and Fri 7/26 to tell Marriott, Hilton, and Sheraton we see their complicity and REJECT their profiteering off injustice. We demand they CANCEL all contracts with the ACA. When you’ve called, please fill out our report-back form: https://deeperthanwater.org/callreport

Hello, my name is ________. I am calling because I learned that your hotel is profiting off the detention of immigrants, mass incarceration, and the abuse of prisoners by hosting attendees to the American Correctional Association’s conference in Boston August 1-6.

Your company recently publicly declared it would not allow its hotels to be used as detention facilities. The logical extension of this moral stance is to refuse to profit off of the corporations running prisons, jails, and concentration camps.

We demand that you immediately cancel all bookings related to the ACA conference and produce a public statement declaring your hotel will not be complicit in genocide and the caging of human beings.

Will you be canceling all contracts with the conference?

Tell us how it went at: https://deeperthanwater.org/callreport 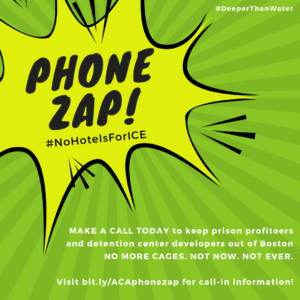