As we prepare to head into the winter, with no sign of the COVID19 pandemic abating, cracks in the DOC’s public relations facade are becoming wider and more apparent as even their “infection control” strategies lay bare just how little they understand about controlling a pandemic. Outbreak after outbreak within the Massachusetts DOC has shown that what prisoners and health experts have been saying all along: there’s no such thing as a “safe” prison.

“For those of us that have underlying issues, like myself with asthma, its a big risk. And now the food here has no nutritional value to help build a strong immune system. There’s no prevention. It concerns me heavily and I don’t see the administration having proper PPE. The majority are wearing thin masks or nothing. And they aren’t required to be tested, like the incarcerated population is. My life is on the line”

Since that message, MCI-Norfolk has seen 54 prisoners taken out of their cells and “cohorted” with other exposed prisoners. This isn’t how medical isolation works; when they did this at MCI Framingham the spread of infections spiked. Placing those who may have been exposed with those whose exposure is nearly certain increases the likelihood that all involved will be exposed to the virus. Quarantine efforts like this in the past, which treated all exposed parties as already-infected have lead to mass infections.

Perhaps even more astonishingly than their failed quarantine protocol is the fact that prisoners are being “isolated” in a unit that was closed due to black mold, an environmental pathogen that leads to, of all things, respiratory distress.

Recently, despite clear evidence that the most effective mask strategy is the regular distribution of fresh disposable surgical masks, the DOC astonishingly ordered incarcerated people to start producing cloth masks for their own use. Subsequently, in a combination of brutal austerity and deliberate indifference, the DOC has discontinued the distribution of surgical masks in MA DOC facilities. This comes despite a study from the CDC’s infectious disease journal showing that: “During a pandemic, cloth masks may be the only option available; however, they should be used as a last resort when medical masks and respirators are not available” [ pdf ] About this, another of our comrades inside had this to say:

“We are now required to wear cloth masks manufactured by incarcerated people. Its the same cloth that’s used to make our uniforms. I am more comfortable wearing the surgical masks that most people wear outside the prison. But now, the surgical masks are considered contraband.”

Our sources also highlight the importance of noting that surgical mask distribution ceased two weeks ago, coinciding with the rapid spike in infections following the average incubation period. As the population of Norfolk remains largely static, and following on the revelation that a phlebotomist brought the infection into MCI Shirley, it is widely believed that the MCI Norfolk outbreak was caused by a guard who has now been identified.

This outbreak also leads to important questions about the DOC’s adherence to the decision made in SJC 12926 (and general honesty with the public), which required prompt reporting of infections. The ACLU’s Data for Justice COVID19 tracker shows that the DOC has been slow to share data with the outside world as the plotted numbers lag far behind real-world reports.

At the end of the day, decarceration is, and remains, the only answer. This newest outbreak comes on the heels of a historic decision by the American Public Health Association to ratify a statement endorsing abolition as a necessary public health strategy to address the crisis that is incarceration in the United States. This decision comes after months of COVID19 outbreaks across the country that have shown that which epidemiologists always knew: the only way to prevent the widespread loss of life is, and always has been, to send people home to the communities that love them. 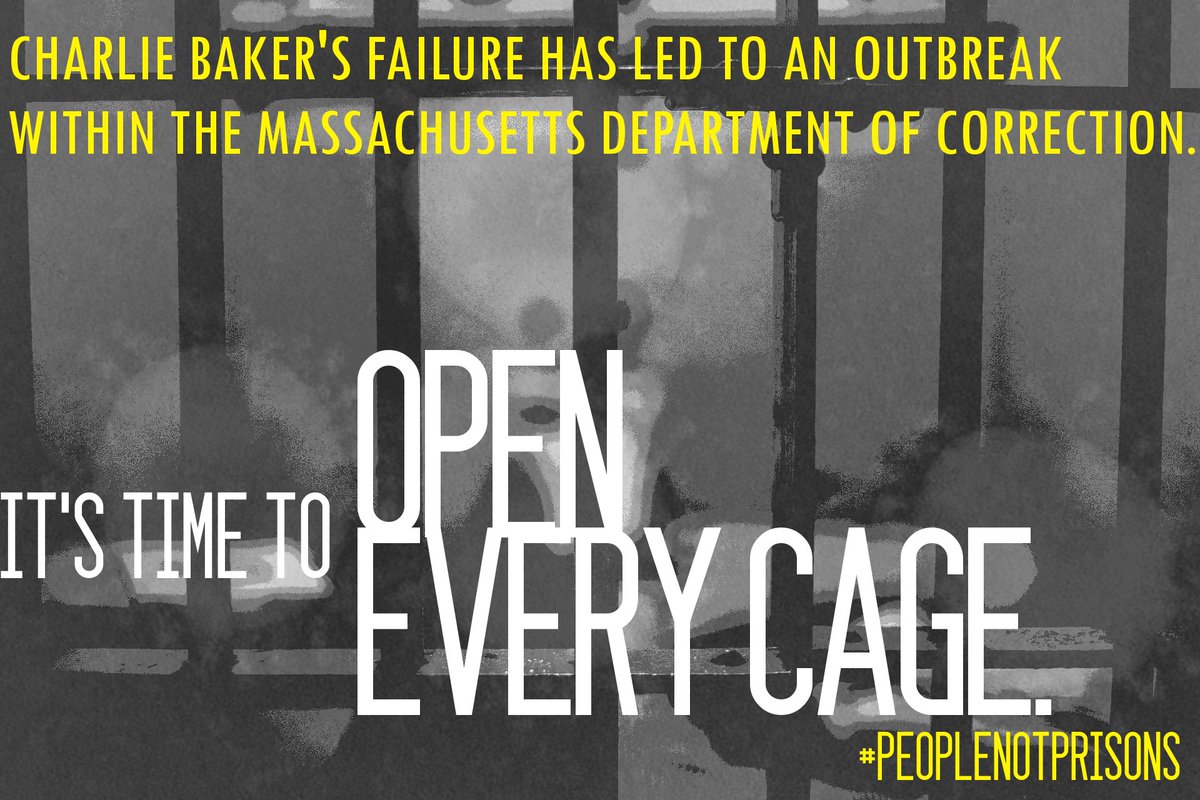 Help spread the word, like, reshare and repost this message:

Want to embed this code? Just insert  bit.ly/tweet2MDPH into your social media posts.

Today, people were pulled out of their cells on X's unit at Shirley after a phlebotomist tested positive for the virus. Similar reports at Norfolk of innefective containment efforts. This. Was. Always. Preventable. https://t.co/WkpfeaXHM3