#DeeperThanWater is proud to endorse the National Prison Strike and their associated demands called for August 21, 2018. Read the full call and list of demands here.

We recognize prison, police, and parole as primary tools in the machine of white supremacy and white supremacist capitalism. The animating spirit of prison, police, and parole is the idea that Black and brown and poor people are not human, thus paving the road for the reprehensible practice of caging our fellow humans and the specific atrocities that inexorably follow.

Workers held captive in state, federal, and immigration prisons have called on us to support them in withdrawing their labor from the system that grinds down their humanity. As we draw on 500 years of abolitionist movement building from Beacon Hill to MCI Norfolk, we oppose this modern day system of slavery and segregation. In the demands put forward by these held captive  illustrate, there is so much we can do to keep building toward abolition.

To our supporters on the outside, look for an action during the strike (August 21-September 9), follow the strike online and wherever possible direct mainstream media attention to it.

Write to prisoners. There will be retaliation, when there is – show up and hold the jailers accountable.

As one of our beloved friends and incarcerated organizers is fond of saying – we see this strike as the loosening of nuts and bolts in the prison system. Eventually, it will collapse.

And with it, so will one more leg of white supremacy.

Amani Sawari/Sawari MI – Organizer with the #August21 movement, home of the Solid Black Fist newsletter, the official National Prison Strike newsletter (see issue 1 for a recap of May 19 rally in honor of Malcolm X). Listen to an interview with Amani talking about the strike on Final Straw Radio here.
[  site: http://sawarimi.org/national-prison-strike | twitter: @sawarimi ] 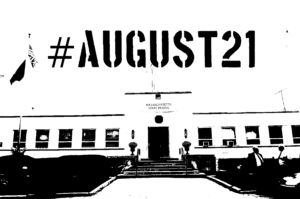