Please see a request from one of our comrades at Black & Pink about a member inside who needs our support. We’re in this together and right now Juan needs us. Please email fill this quick form out after you do!

As many of you know, my friend Juan has been struggling. He was attacked last year and nearly beaten to death, and has been suffering from undiagnosed PTSD from this event. He is scared all the time, and is hypervigilant and quick to move into a fight or flight response.

On Sunday he was playing poker and went to get his leg brace from his cell. Another guy he was playing with asked him to close his cell door. Juan did so not knowing that an officer was in that cell (which, sidenote, he shouldn’t have been in there with the lights out). Juan realized what he had done wrong and apologized, but officers surrounded him. He doesn’t remember that much of what happened next, but he went into full adrenaline mode. He panicked, went into his own cell, and tried to kill himself.

Juan has been asking for mental health consultation for months. This has been a very difficult year. He is actively suicidal and feels like no one is helping him. He feels trapped in this system with no way out and that the pain isn’t worth living through anymore.

He went to the hospital and was sent back to Norfolk yesterday. He has been in medical segregation for the last two days unable to sleep due to the florescent lights. They are saying that they are going to transfer him to segregation which is NOT appropriate for someone with active suicidality. Despite asking to and warning people in mental health about how poorly he has been doing, Juan has still not had anyone take him seriously, has not gotten consistent mental health support or any visits by a prescriber.

I need your help. It has been really awful trying to support a friend going through this who is pleading for help and no one is listening to him. I am really worried about him. If you are able to make a call tomorrow, please do. Script and talking points below.

– “Hi, I’m calling in support of Juan Figueroa (#W93992)
It has come to my attention that he has two tickets as a result of a trauma-response and trying to commit suicide.
– I am concerned because he has been told he will be moved to segregation, which is not appropriate for someone who is actively suicidal.

He is requesting the following:
– To be moved back into general population which he believes is the location that will minimize the risk of suicide;
– To see a mental health professional on a routine basis for therapy to help deal with his ongoing depression, trauma, and suicidality (has been requesting this);
– To see a prescriber to evaluate him for psych meds (has been asking for this).
– All of these things are more than reasonable.

Can I count on you to call tomorrow? Put a note in your calendar and comment here or lmk how the call goes. Calling really does work! Even if they are non responsive over the phone they know we have eyes on him. 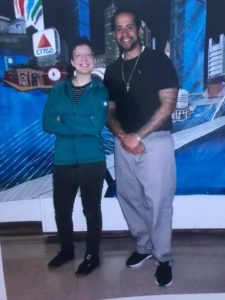